What are silk scarves?

Silk scarves are the epitome of beauty, elegance and sophistication. The shimmering colors of the vibrant and rich material complement every fashion style from the elegance of historical nobility to contemporary Boho chic. Silk scarves have been around for literally thousands of years. They are not the newest fashion trend to hit the runway, but they are a timeless staple for every wardrobe. Silk scarves helped to define fashion trends throughout the ages.

The Origin and History of Silk

Silk is one of the world’s original textiles used for clothing, banners and scarves throughout the ancient world. Along with wool and flax being produced in ancient Greece and Rome, silk was being produced by the Chinese thousands of years ago. Silk played a monumental role in world history. It opened trade routes between the Far East and the Near East. The discovery of silk is shrouded in mystery and has several different accounts. One story about the discovery of silk dates back to nearly 3000 BCE. While there are a number of tales and myths about the discovery of silk, the most common story told is that of Lady His-Ling-Shih proclaimed to be the Goddess of Silk. Lady His-Ling-Shih was the wife of the legendary Yellow Emperor. Legend has it that a silkworm fell into her cup of tea. As she retrieved the silkworm she unwound the fibers. As a result she created the loom in order to weave the silk fibers into material. Hence, sericulture was born.

Today silk scarves come in a variety of sizes, shapes, colors and patterns. They are used in a number of fun and creative styles. Scarves are being specifically designed and sized to serve a variety of uses such as head scarves, neck scarves, belt scarves and more. Prices can range from a modest twenty-five dollars to designer creations reaching up to five-hundred dollars. The shape and size of the scarf may sometimes determine its possible uses, although with some creativity scarves can be used in various ways to create new looks for all occasions.

Rectangular scarves can be used around the neck or as belts if they are long enough. Square scarves are ideal for headscarves and remind us of the elegance of Grace Kelly and other classic celebrities from the past.

Colors and patterns also vary greatly. Favorite prints may include nautical themes, floral designs, wild animal prints, western motif and modern art. The shimmer of color on silk is vibrant and rich. Any outfit is greatly enhanced by a silk scarf and with so many different designs and color choices a woman can easily personalize her wardrobe by the selecting the colors and patterns that express her personality. 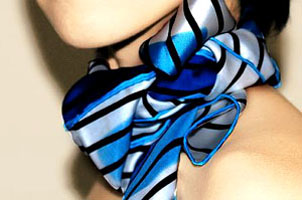 The perfect silk scarf is a personal preference and the ensemble the scarf is meant to accessorize. Silk scarves are the perfect accessory for self-expression. For example, a day out horseback riding, going to the rodeo or to country western concert is the perfect time to pull out the denims, boots and cowgirl hat tied together with a country western motif or horse print silk scarf. The same themed ensemble can be pulled together for a day out to sea with a classic anchor-themed silk scarf. Silk scarves can be matched to any occasion even with a very basic and neutral ensemble.

Silk scarves have a wide range of uses and are one of the most versatile accessories available. Uses for silk scarves is really only limited to the imagination of the wearer. Some tried and true basic ideas include using silk scarves as an ascot, head covering, headband, neck wrap, belt or hip sash. Scarves of silk can be worn with a simple dress in the summer, with winter clothing, with business suits and with any casual dress.

An ascot tie is typically worn by men. The silk scarf is placed around the man’s neck and tied in similar fashion to a tie. It is typically narrow with wide wings. It is usually patterned, folded over and held in place with a stickpin or tie tack. It is then placed into the top of the shirt with the top button open. In the 1880s the ascot was worn by Europe’s upper class. In the 19th and 20th centuries it was common to see ascot ties worn business. It is less common today but still looks dashing on men.

The Grace Kelly Scarf is worn as a head covering and the epitome of glamour. The Kelly head wrap is great for keeping the neck, ears and throat warm and protected from the sun’s rays. Place the scarf over the head and under the chin then wrap it around the throat and tie at the back of the neck.

There a number of ways to tie silk scarves as neck wraps. Some are very simple and elegant looking. Others a take a little more practice. The simple drape is just like it sounds. Simply drape the scarf around the back of the neck and let it hang in front. Adjust both sides until they are equal in length. They can also be secured with a broach in the center or pulled up to one side. Another simple wrap is to circle the neck one time and then pull both sides down in front adjusting the sides to equal lengths.

Silk scarves have been here for thousands of years and will always be included in the ever changing world of fashion. They are an essential accessory to any complete wardrobe and can add versatility, color and interest to any ensemble.

Video: 25 Ways to Wear a Scarf 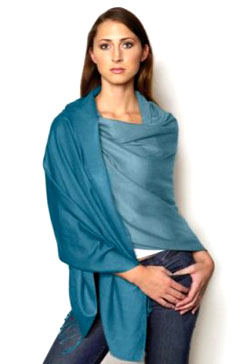